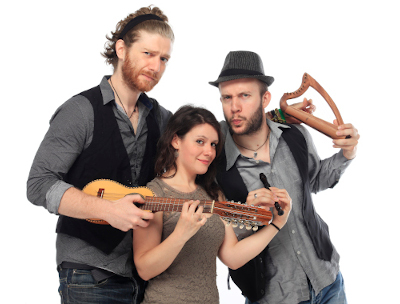 70 strings, no bellows, and a lot of energy! Have you ever danced a mazurka played by a bowed psaltery? Have you ever got involved in a harp-played bourrée? If you never lived such a mystical experience you should absolutely come across LyraDanz! LyraDanz arises from the idea of three musicians, already well-known in the Celtic and bal folk music scene, who share the passion for folk music and experiment inusual instruments in the traditional folk repertoire. A harp that unexpectedly detaches from the conception of a melodic and airy instrument and discloses a "mediterranean" soul, rhythmical and playful. A bowed psaltery, almost never used in the bal folk genre and generally tied up with the ancient music domain, here played in a modern way and pushed to the limits of its melodic and vistuosistic potentialities. A guitar ranging from the manouche to the rumba styles, from flamenco to jazz, that becomes the driving instrument to experimentation. A fresh, innovative and sparkling project, that explores the French, Occitan, Breton, Basque bal folk repertoire along with original compositions. LyraDanz is a musical project based on a bal folk repertoire, both traditional and original, played with some inusual instruments in the balfolk scene, such the popular harp and the bowed psaltery, and with an innovative approach to the arrangements.